On Sunday I headed over to Snowdonia for a day walk up Rhobell Fawr. I was accompanied by 3 of my usual walking buddies, Mitch, Ryan & David and my dog Megan joined us for her first trip of the year. Our start point was the small village of Llanfachreth, the sat nav sent me up a small road and I was starting to wonder where I was heading especially when we passed through CaredFawr Arch It looked like we were entering Jurassic Park. Thankfully we were not attacked by any large pre-historic animals and easily found the car park next to the school.

We set off walking through sheep filled farmland and picturesque woodland before meeting a track which we followed until it reached a stile by a sheep pen this was where we turned off to follow a wall all the way to the summit, a great handrail to use if ever the visibility was naff, luckily for us the visibility was fine. 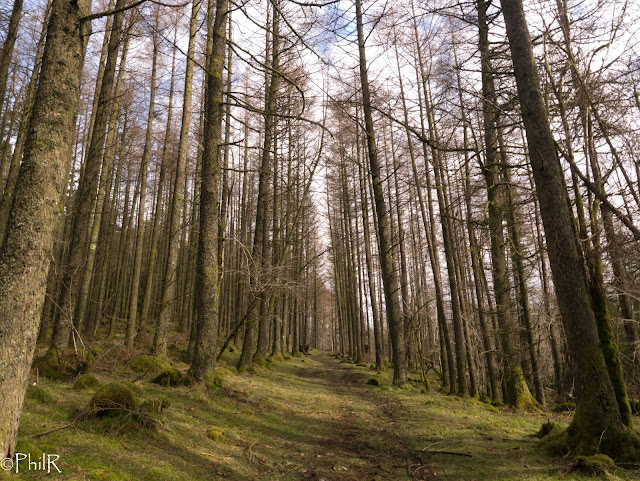 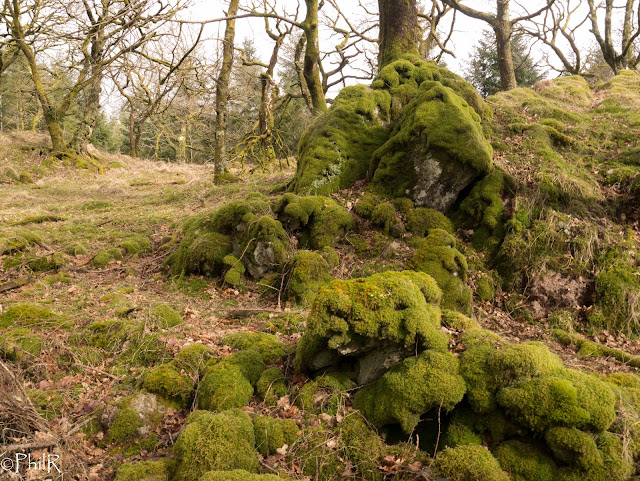 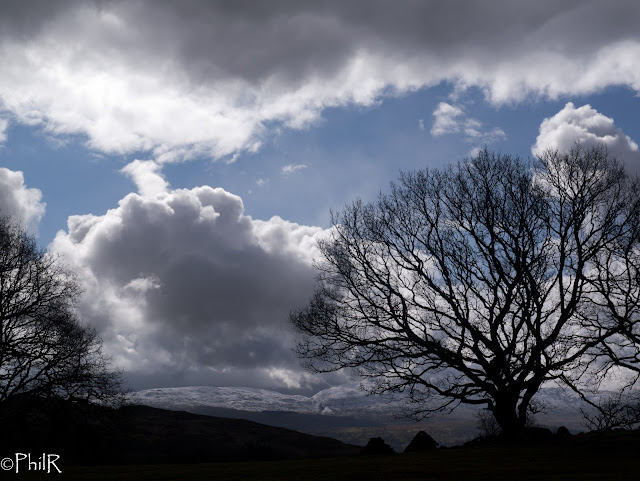 During the early stages of this section we saw three deer watching our every movement intently before they decided we had encroached too much and disappeared out of sight. As we gained height the snow became more widespread until we were wading through a good depth of virgin snow. 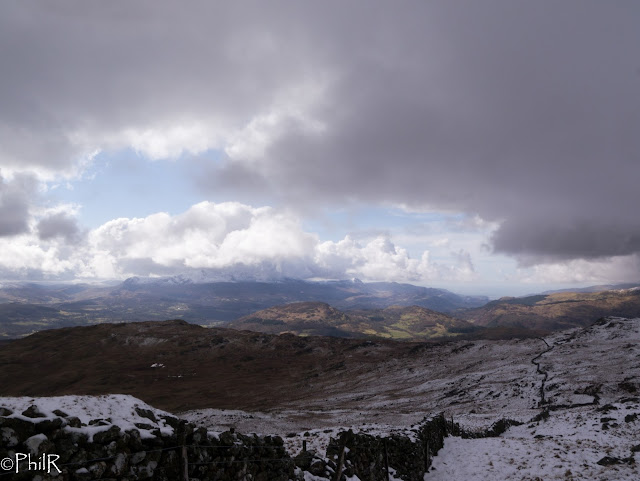 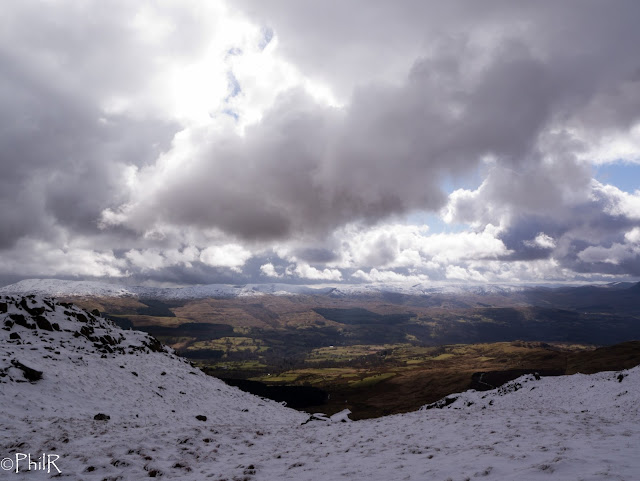 It was not long before we could see the trig point and headed over to claim yet another peak. The very top of Rhobell Fawr is open to the elements and stands at 734m so not the tallest summit in Snowdonia however the isolation of this peak gave a superb 360° panorama, In fact one of the best I have seen in North Wales. This was made all the better as the skies cleared, perfect timing! Looking at Cadair Idris and turning in a clockwise direction, the snow-capped peaks of whole of the Rhinogs, the Main Snowdonia ranges (shrouded in cloud), Arenig Fawr, the Arans and back the Cadair Idris it really was a wonderful sight. 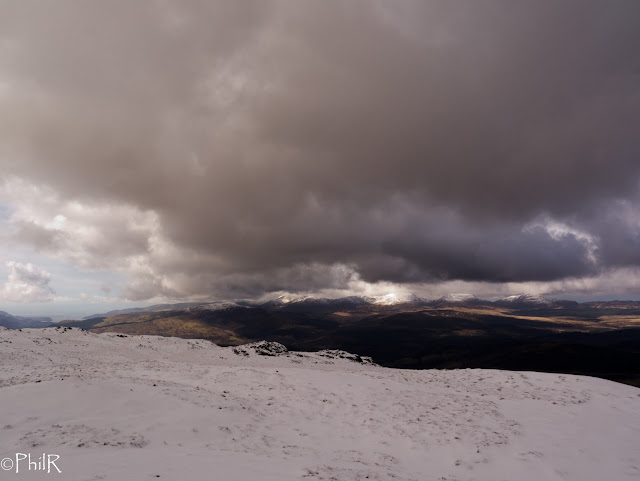 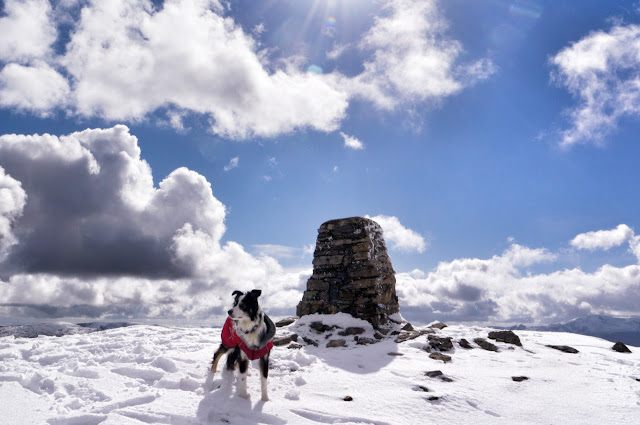 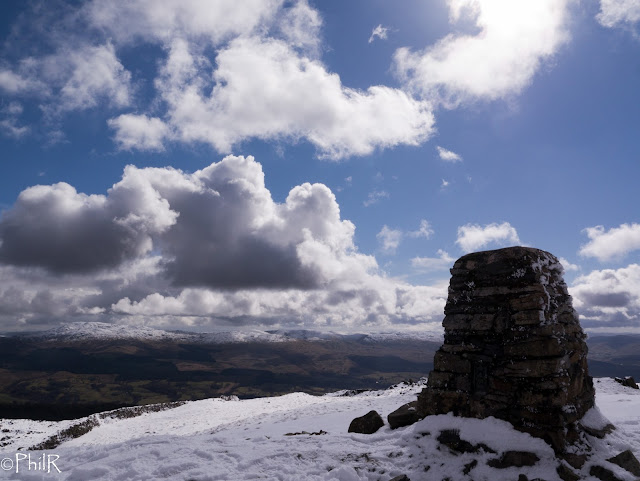 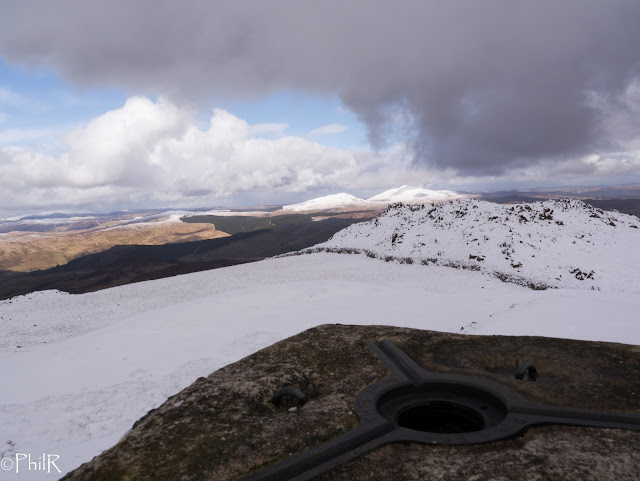 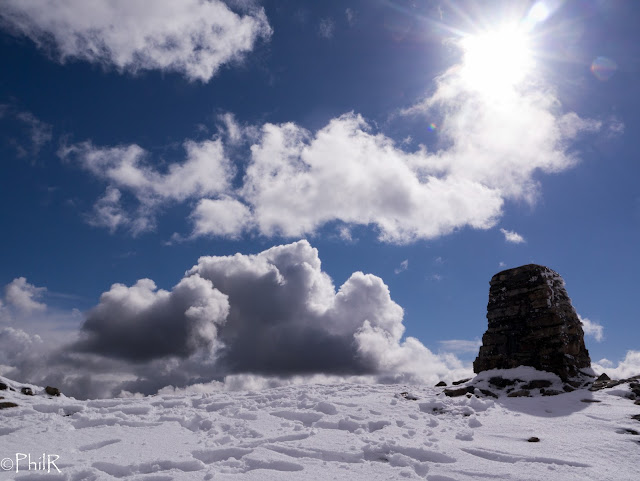 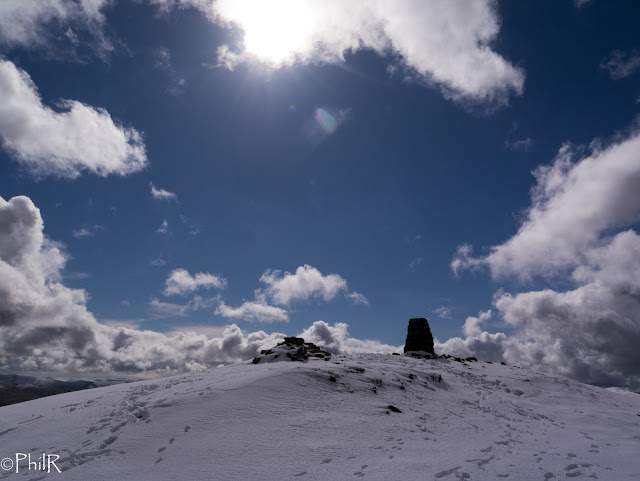 We sheltered behind a wall for refreshments before heading down again following a convenient handrail yet another wall. As we headed down out of the snow there were a couple steep sections nothing serious but hands were required, Megan leaping down make it look easy, we eventually met up with a track and followed this. 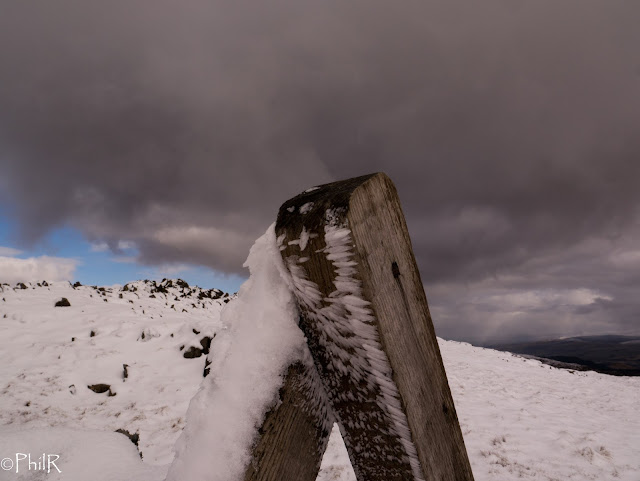 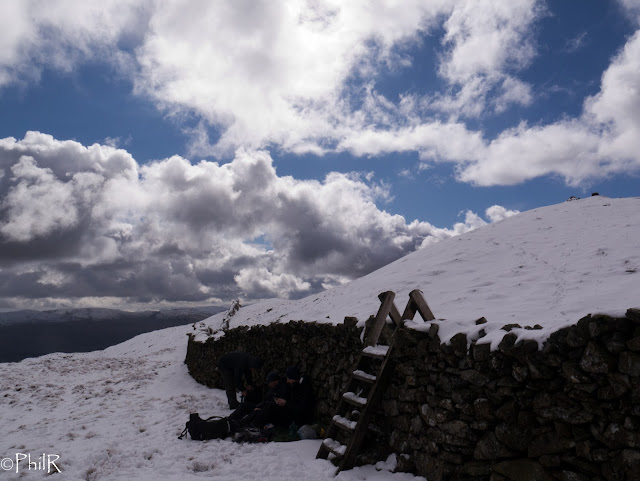 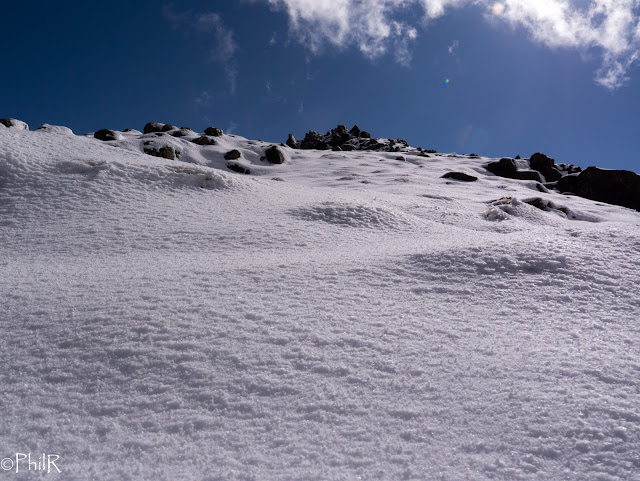 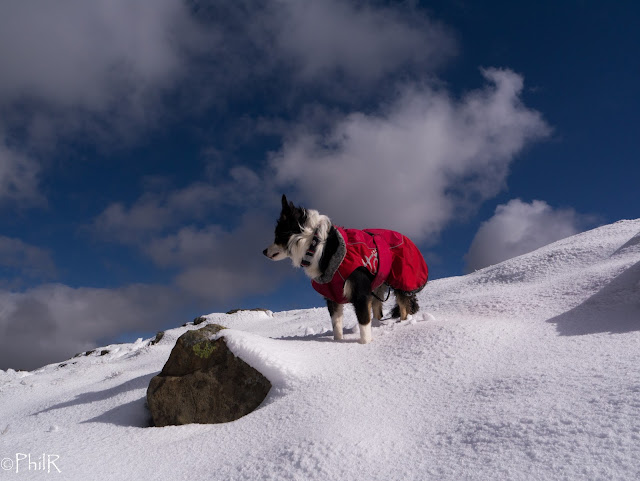 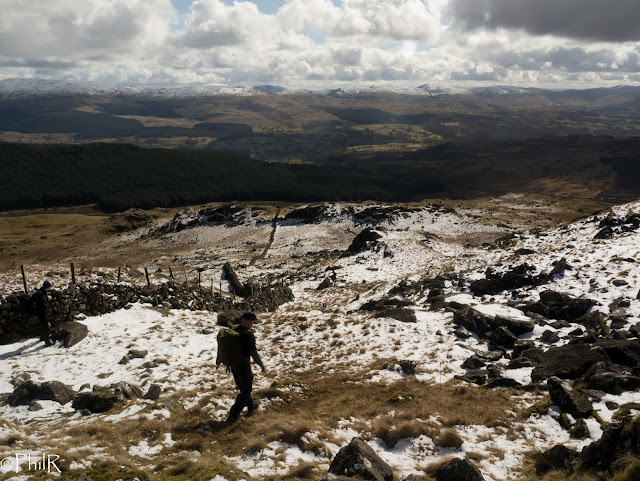 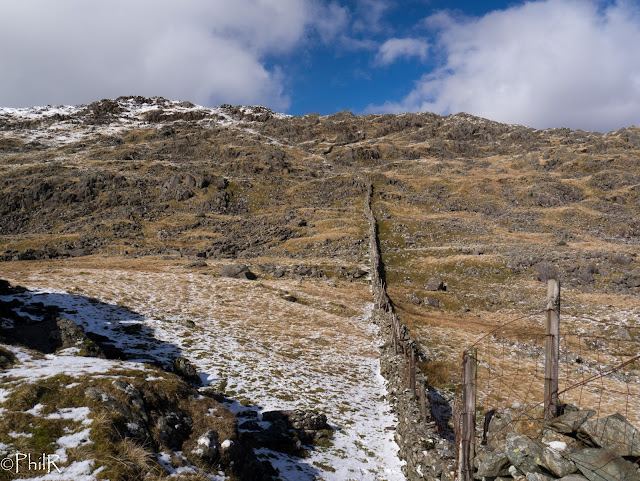 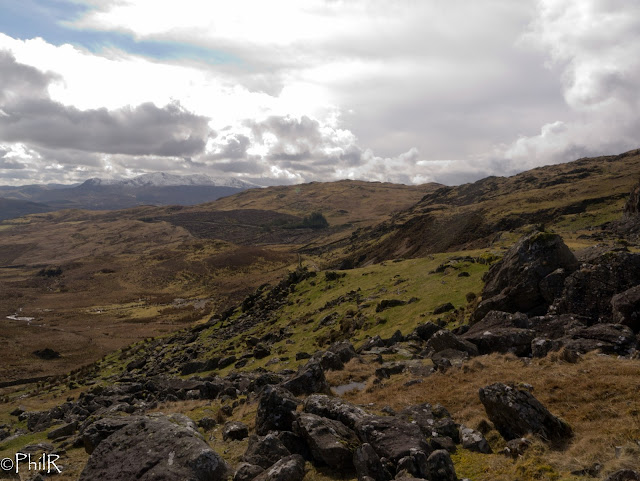 As we were walking along here we came across a nice waterfall which flowed through a small tunnel under a bridge, Ryan said, “Mitch, you could climb through that” of course that was like a red rag to a bull so in true Mitch style that is exactly what he did!! We laughed and joked that he looked like Gollum coming out of his cave, Nutter!!! 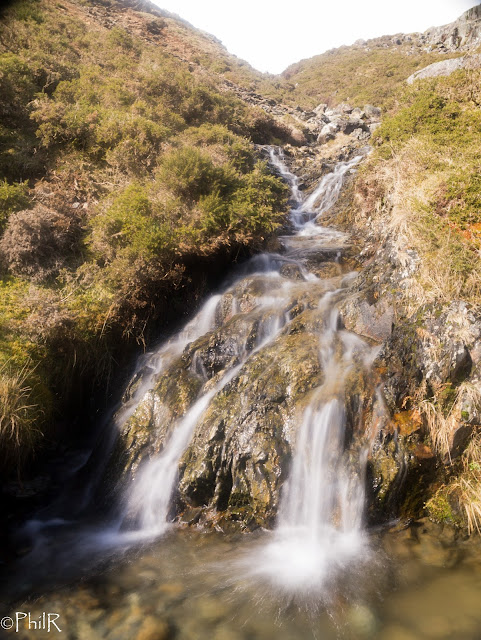 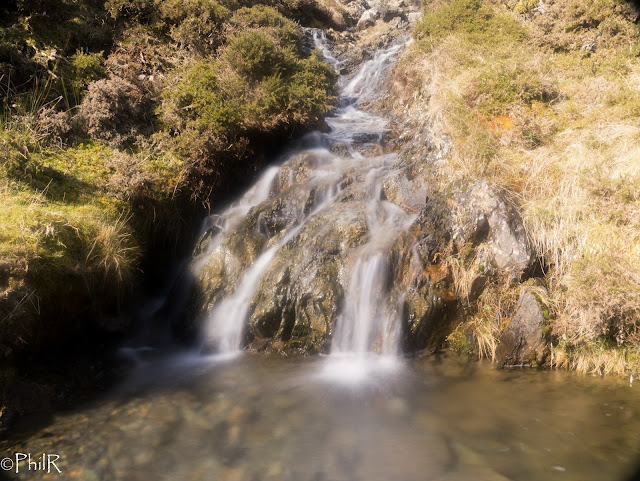 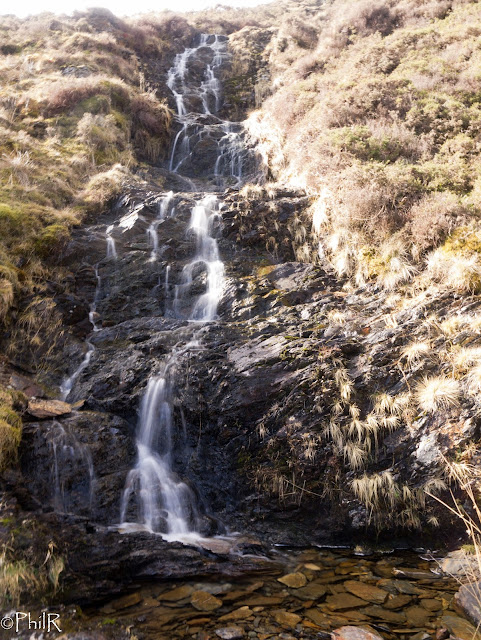 We continued along the track before heading off following a path which skirted round the south of Moel Cors-y-garnedd and back through farmland to Llanfachreth and the car, Megan loved the walk and before we had got changed and packed the gear away she was fast asleep in the boot. 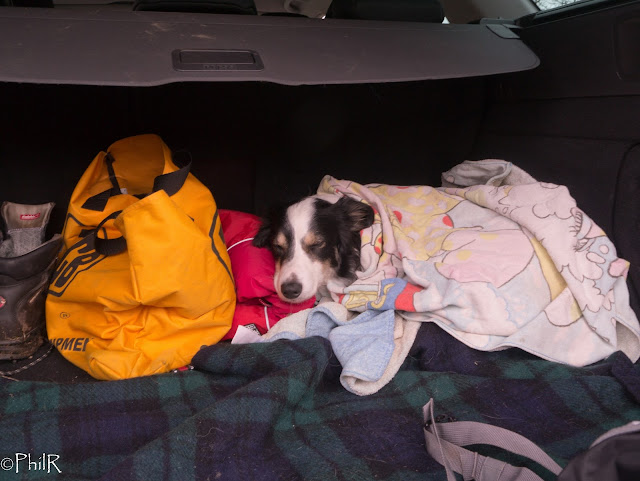 I really enjoyed this day walk, with great company and a really good laugh. We saw no one, not a single soul while we were out on the hill and the reward of the summit panorama for the relatively easy effort it took to get up there was simply superb. 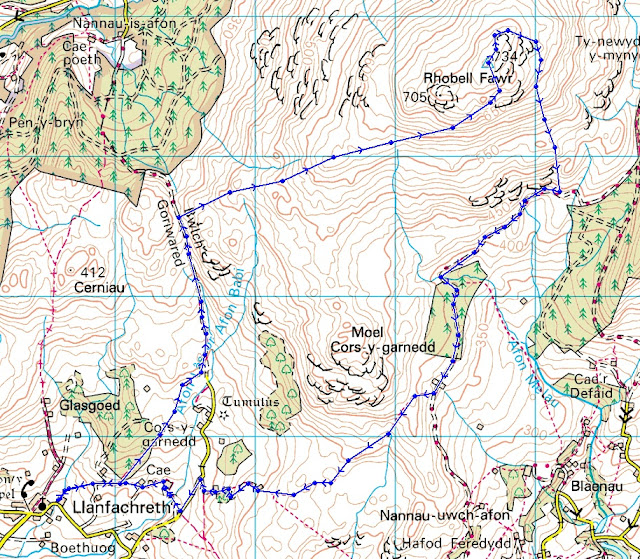