A circular walk in the Carneddau, including the peaks of Pen yr Ole Wen, Carnedd Dafydd, Carnedd Llewelyn & Pen yr Helgi Du. Again I was accompanied by my friend Mitch, we parked the car on the road side on the A5 and set of up the footpath which runs along the side of the Afon Lloer the cloud base was fairly low and looked thick so I wasn't expecting any decent views from the top based on what we could see in the Ogwen valley. We soon reached the the start of the steep climb up to Pen yr Ole Wen by the shores of Llyn Lloer, Now due to the visibility and the snow I think we must have strayed off the usual line of ascent very slightly as we seemed to be further round the spur and the hands where definitely required as we where going straight up. Thankfully nothing major and after a bit of scrambling it was long before the gradient eased and we picked up the usual path up onto Pen yr Ole Wen summit. My expectations from the Valley where correct the views where non-existent. We didn't linger and continued on, the snow in places was quite deep in fact up to my knees at one point.... although that is not difficult as I have short legs.
When we reached Carnedd Dafydd summit the wind had picked up and we had to lean into it for the summit photo. The last time I was up here I had a great cloud inversion to view, no such luck this time although that was about to change as we went across the ridges that separate the two main Carneddau peaks, then headed up the final ascent to Carnedd Llewelyn we seemed to come out of the clouds, I grabbed the camera out the bag and started snapping away. When we reached the top I even managed to catch a Brocken Spectre. We made our way down to Penywaun-wen and the cloud seemed to be chasing us down by sweeping over Llewelyn summit towards us. One more peak remained and a short scramble up onto Pen yr Helgi Du gave us some great views back to Llewelyn again the cloud sweeping over the summit. All that was left now was the easy descent down Y Braich back to the A5 and the car. This was a fantastic day in the mountains and my initial fears of non-existent views where certainly premature.
﻿ ﻿ 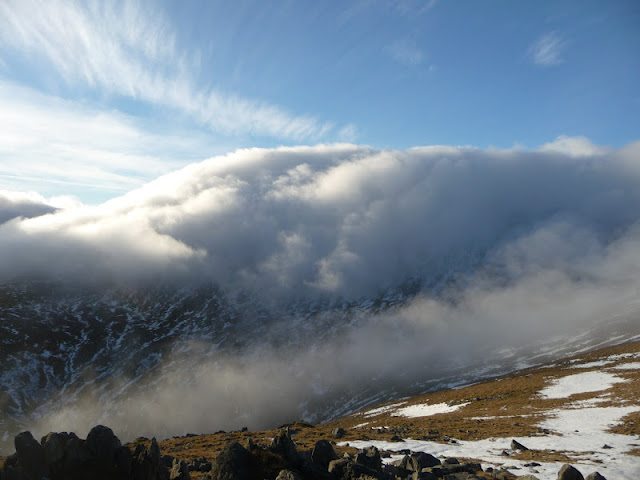