A quick walk in the Malvern Hills

We woke up on Saturday morning to be faced with a beautiful fresh clear day so we decided to go for a quick walk in the . The Malvern’s are South West of Worcester and can clearly be seen from the M5 and M50 motorways. They have been described as a mountain range in minature with an 8 mile ridge running North to South along the Herefordshire and Worcestershire border.

We parked the car on the road side in Upper Wych and set off up Worcestershire Beacon following a clear path well actually it was more like a highway as it seemed a sizable number of people got up that morning and must have had the same idea as us!! Oh well.
It didn’t take too long at all to get up the Beacon trig point and toposcope although we did stop off en-route to enable the kids to have a good climb over some small rocky out crops. The Beacon which is the highest point in the Malvern hills at 425m has some far reaching views as the surrounding land is low especially towards the East.
We continued on Northwards and dropped down off the Beacon and headed up Sugar Loaf Hill where we stopped for sandwiches and a good old cup of tea. Suitably refreshed we then went straight up onto North Hill. Then descended via an easier path leading off west from the top and it skirted its way back to the main path, we then re traced our steps back over the Beacon and down to the car.

All in all a quick but very enjoyable walk with the family, it would be nice walk the whole 8 mile ridge of this very accessible area. 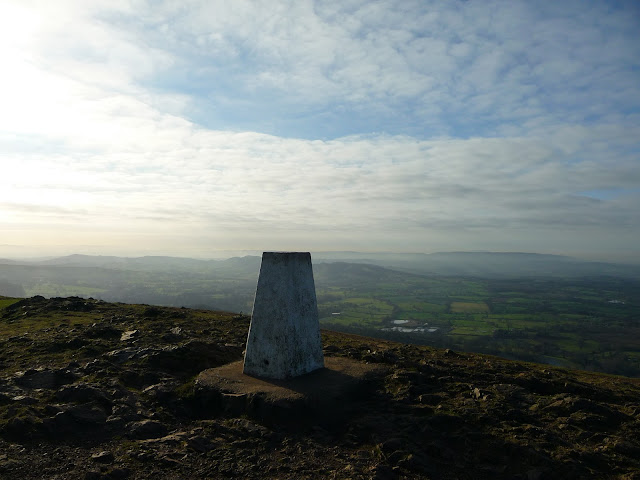