A Harsh lesson learned in the Black Mountains

A planned circular walk around Grwyne Fawr reservoir turned into a nightmare for me and more especially my dog Megan who got hypothermia more on this later in the post. I knew the weather was not going to be the best but I deliberately wanted to test my navigation and my new Rab Latok Alpine jacket which I picked up at my local Cotswold Outdoors in the sale for a bargain. So my friend Mitch and I set off for early in the morning reaching the Blaen-y-cwm car park in Mynydd Du forest just after 9:00am, walking out the car park we had no idea of the events that lay ahead of us.

Ignore the spelling mistake in the video, should be Hypothermia instead of Hyperthermia. 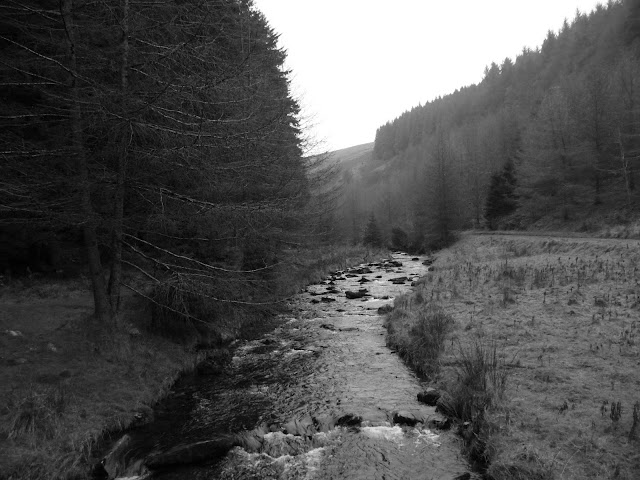 Crossing the footbridge over the Grwyne Fawr we set off up Pen y Gadair Fawr following the wide spur straight up to the 800m summit cairn, it was quite a pleasant walk up with Megan happily chasing and retrieving sticks, that was until we reached the cloud base at around 650m, Visibility soon reduced and the rain came. As the ground started to level off approaching the top, the winds which we were previously well protected from suddenly hit us. I don't have a device to measure wind speed but at a guess and it is just a guess I would say around 30-40mph. 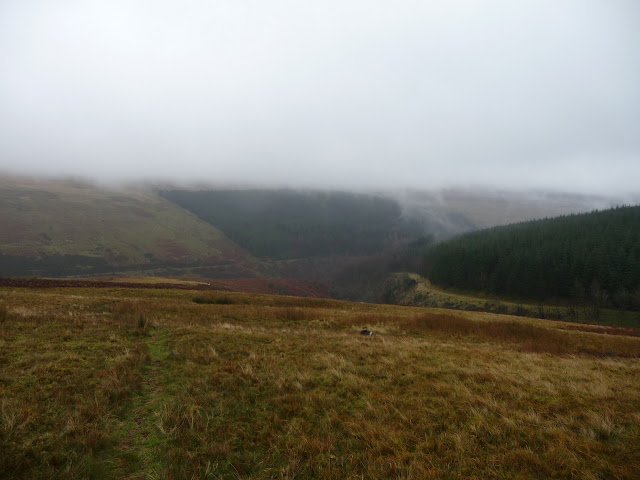 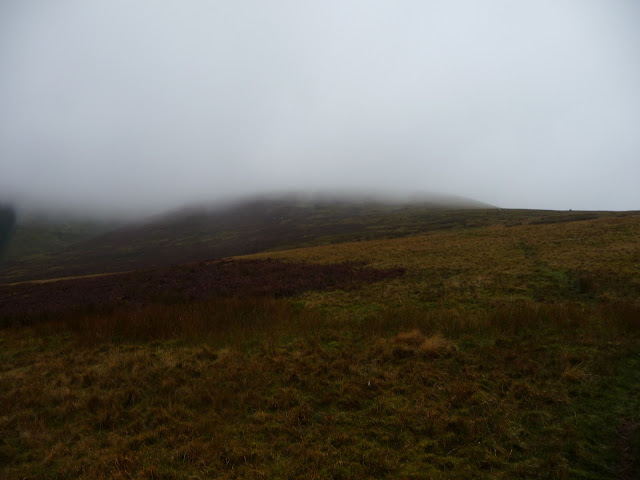 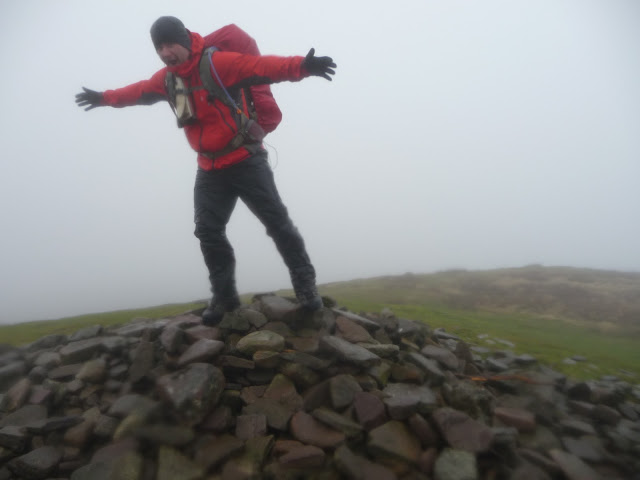 The views from Pen y Gadair Fawr were as you can imagine non existent so we didn't linger to admire the stunning panorama!! Stopping just long enough to put some gloves on and put Megan’s coat on her. Taking a bearing we set off for Waun Fach, if you have been to this area before you will probably know how boggy it is and the walk across to the highest point in the certainly was bog feast. We went in ankle deep plenty of times, keeping a close eye on the nav as it is very easy to get off track up here in those conditions we eventually reached Waun Fach summit and stood and looked at the remnants of the trig point from a distance as it was surrounded by an absolute quagmire of black bog!! Lovely. 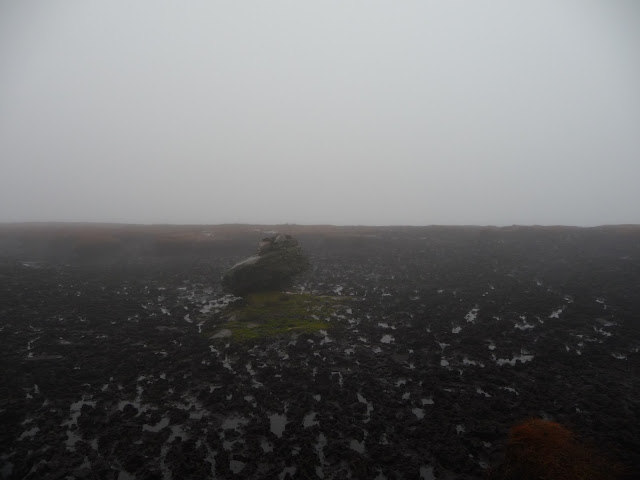 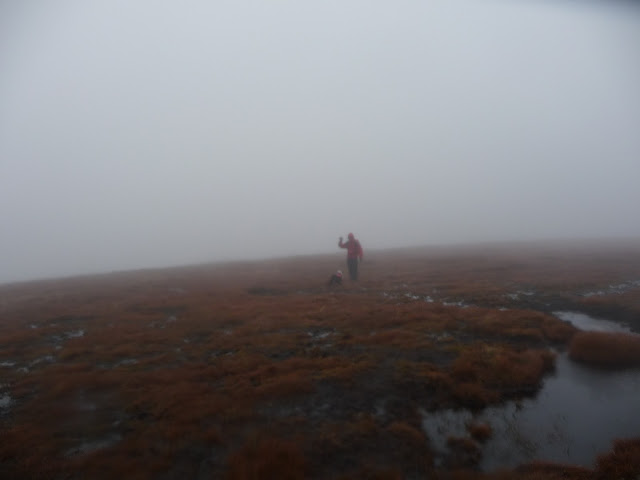 Again studying the map and taking a bearing we continued on and headed north-west towards Pen y Manllwyn picking up a yet another wet and boggy path. Megan still walking along happy beside us, this was soon to change however. It was when we got to the cairn on Pen y Manllwyn that we both noticed Megan was now looking cold and not interested in the walk anymore.

Now our original plan was to continue round to the 713m trig point and then drop down the Nant Bwch to a waterfall before heading off path back up to Twyn Talcefn following the ridge a little bit before dropping down to the Bothy at Grwyne Fawr Resevoir. Looking at how cold Megan was I decided to forget all that and just come straight back down the Grwyne Fawr to the bothy to get her warmed up.

It was during our descent down the Grwyne Fawr that Megan dropped off the pace something which she never does, once she caught up with us she just laid on the ground and curled up. We were roughly around grid ref SO216321 when we took the decision to carry her to the bothy. After a couple hundred metres of carrying her she just went totally stiff in my arms, she had hypothermia and was having a fit / seizure, her whole body just went rigid it was like holding a taxidermists stuffed animal not a lively bouncy Border Collie. I cried out “oh no”!! I will never forget the look on her face at that moment. I hurled my rucksack off as quickly as possible and asked Mitch to get the survival blanket out, the fit had now eased off and we put her into the survival blanket, I just sat there cradling her in my arms trying to get her warm, thinking I was losing her. Time was a complete blur but after what seemed like 5 mins we decided to get her down to the Bothy as fast as we could, again taking turns carrying her but Mitch doing the bulk of this as I was struggling carrying her due to my back. We got to the Bothy and I tried to light a fire but to no avail as the wood was too wet, so I quickly fired up the Jet Boil and lit every candle I could find, luckily there was an old fleece in there and we wrapped her in that, she was barely responding so looking around the Bothy we utilised the strong Lidl “bag for life” carrier bag as a make shift stretcher, the saying “bag for life” is a very appropriate phrase in this situation. Keeping her wrapped in the fleece we placed her in the Lidl bag and holding one handle each made our way back to the car park over 3km away. Although we chalked the distance off fairly quickly considering, it still seemed to take an eternity, regularly swapping arms to ease the weight. Arriving at the car we lay Megan on the back seat and wasted no time in setting off, as expected there was no phone reception until we got closer to Abergavenny. I rang home and my wife then contacted our vets, they where ready to take her but being back in Oxfordshire suggested I find a vets closer to where I was. My wife managed to get us into vets in . Arriving there she was taken straight in to be seen, putting her under a heated blanket, and on a glucose drip, worryingly her temperature was not registering on the thermometer and worse still she started to have another fit. Luckily she was in good hands and this eased. I was now an emotional wreck, I just kept trying to comfort her. She was then transferred to a bed to be monitored. With nothing else we could do we drove home back to Bicester leaving her there in their very capable and caring hands.

Two hours later whilst at home I received a phone call from the vets, I answered dreading what they where going to say, mercifully it was good news. She was now responding by lifting her head. Again a further 2 hours past and I received another call this time with some fantastic news, her glucose and temperature where back to normal and she was up walking around and eating food. We then made arrangements to collect her and bring her back to my vets near home. Now 2 days after the event she has made a full recovery and is back to dropping tennis balls at my feet reminding me it is time for walkies.
It really was an emotional rollercoaster of a day and not one I wish to repeat. I have very mixed emotions about the experience, firstly I feel totally responsible and terrible for what happened to her, but secondly I also feel delighted that mine and Mitch’s actions to the situation almost certainly helped to save her life. Talking of Mitch I can not thank him enough for his help and assistance. Top man!!

Also a massive thank you to the emergency vets in Worcester, Vets Now, and especially Antonio the vet who dealt with her. They did an incredible job.

So lessons learned from this experience is to keep an eye on your dog when out walking in those conditions as they can not tell you how they are feeling, look for the body language. Although Megan was wearing a coat it was not a particularly good one so make sure it is a good coat, since the event I have purchased a Hurtta Winter Jacket for Megan. Regarding the symptoms to look out for, shivering, looking weary and uninterested, lying down as if wanting to go to sleep, also feel the inside of their gums to gauge their temperature. Hypothermia can KILL so be prepared, always carry a survival blanket the one I used was an Adventure Medical Kits Emergency Bivvy.

Back on to other things, and just in case you where wondering my new Rab Latok Alpine jacket performed superbly, I’m not one for doing reviews but the eVent fabric was fantastic for me as it’s breathability was the best I have used, also the side pockets where easily accessible as they where free from my rucksack straps. The hood was very good and adjusted to fit perfectly which meant when I turned my head I was not staring at the inside of the hood. A fantastic jacket.

Oh Yeah, I plan to return the Fleece to the Bothy, whoever left it there, thank you. 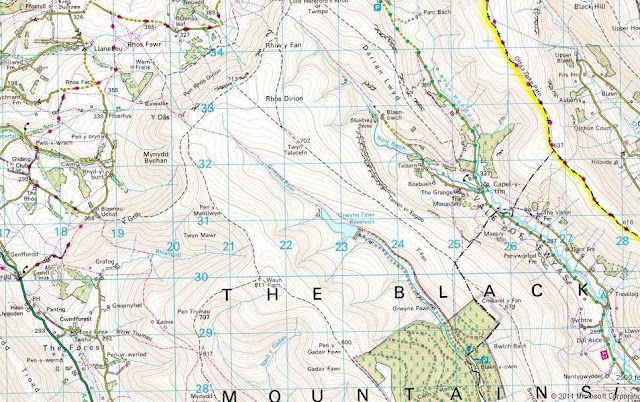