My friend and neighbour Mitch and I went up to Snowdonia on the Friday evening for a planned wild camp round the back of Cnicht, something I had intended to come back and do after I first went up Cnicht back in April. We would then make our way back to the car and drive over to Pont Cyfyng for an ascent of Moel Siabod via the Daear Ddu ridge which surprisingly is a summit which Mitch hasn’t done yet. Finally on the Sunday we would finish with an Abseil when meeting up with some of Mitch’s friends, more on this later.

Cnicht Wildcamp
We arrived in Croesor and set off for Cnicht at 7:40pm on the Friday, it was a lovely clear evening with no breeze at all, perfect camping conditions. Rapidly we made our way up Cnicht trying to beat the sunset in order to get in some decent photos. My first ascent of Cnicht came earlier in the year; in fact the day of the royal wedding in April, when I was up in Snowdonia on a family holiday. So the route up was still very familiar in my mind. Due to the rapid pace and a rucksack full of overnight kit I was dripping with sweat in no time at all, Very Nice!!
As we pressed on relentlessly we passed another wild camper and his dog who had just set up for the night on the flat ground immediately before you reach the final mini scramble to the summit, after exchanging pleasantries we continued on. We had made it in just under an hour and managed to get in some photos in the fading light. Cnicht is a grand little mountain, viewed from Croesor it has that classic pyramid shape, the walk up is very enjoyable as you gain height fairly quickly and gives to some splendid views back across to . 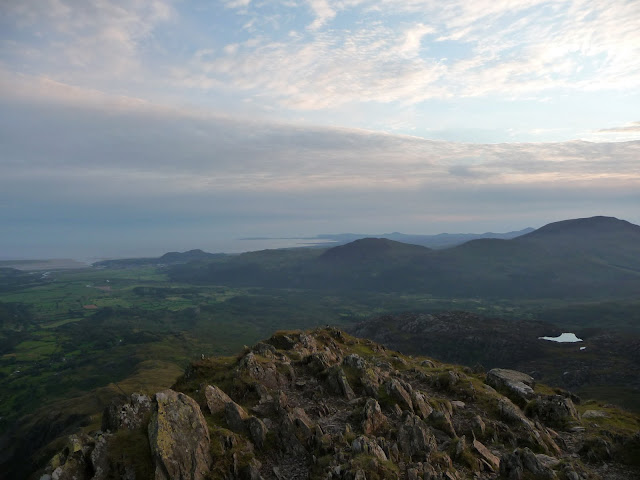 Towards the end of the ascent there is a very easy yet fun scramble up to the peak. Once you reach the top you realise that Cnicht is not the pyramid it seems with a wide ridge that stretches across its back down towards Llyn yr Adar. The view from the top is impressive with the massif dominating the horizon, also in view was the Nantile ridge and Moel Hebog. On the opposite side of the valley to Cnicht is Moelwyn Mawr which towers over the abandoned mines that are scattered around this area, the rest of the Moelwyns then stretched out towards Moel Siabod in the distance. 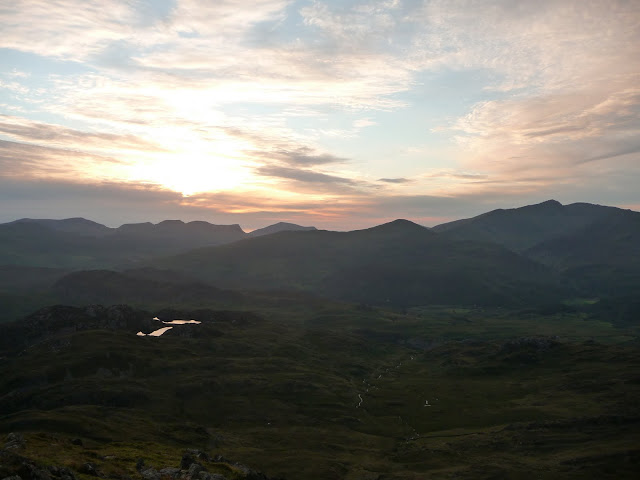 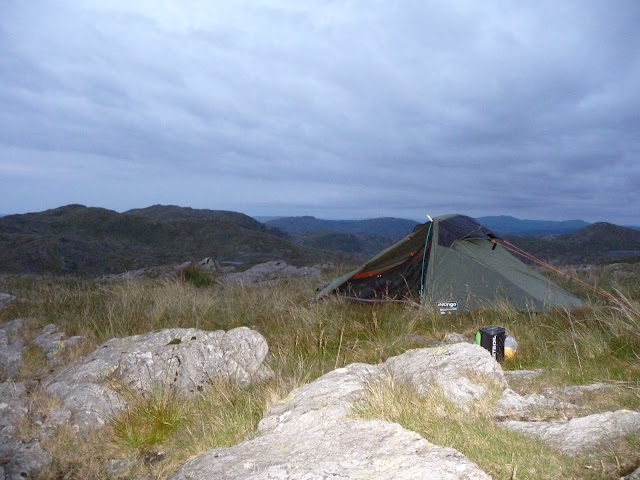 We continued on and found a good flat spot to pitch for the night, following a satisfying meal I settled down to have one my best nights sleep in a tent I’ve had. Morning came and after a quick breakfast we packed the kit away and continued on, passing Llyn yr Adar before turning right the head back to Croesor, the ground was quite boggy along this section but it wasn’t long before the disused quarries came into view. 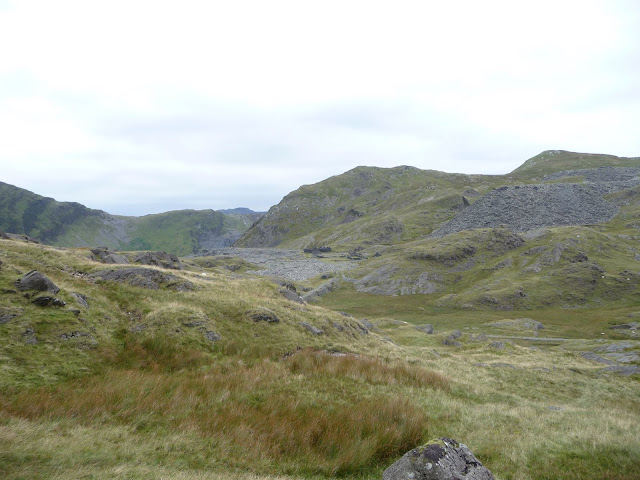 This area must have been a hive of activity when they where operational, Rhosydd Quarry with several pieces of twisted and rusted machinery scattered around still has buildings which are fairly intact and the quarry entrance can easily be seen behind these. It was a very atmospheric place and we stayed for a short time to explore the ruins before heading up the steep incline left by the winch system in between huge piles of slate. 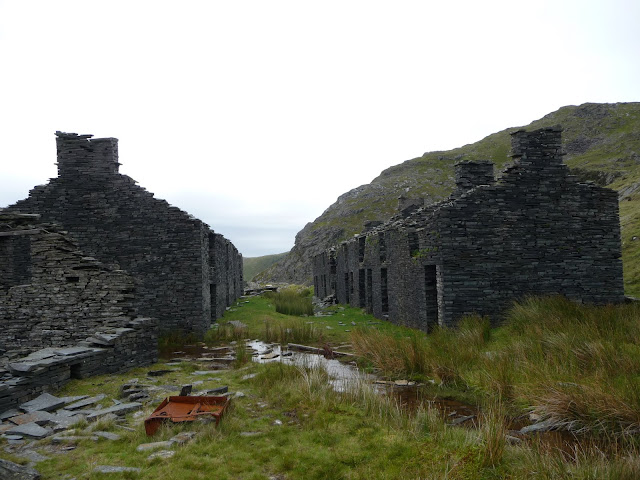 Once at the top it was a short walk across to Croesor Quarry and then the long and gradual descent back down to Croesor.

We then collected the car and set of for Dolgam campsite to set up the tents for that evening as the forecast was for rain later, best to set them up in the dry. Once this was completed we then head for Pont Cyfyng and Moel Siabod.

After refreshments of a good old cup of tea and a sausage bap (with the mandatory brown sauce) at the café in Pont Cyfyng we set off for Moel Siabod taking a steep road up to a farm at which point we left this road behind to follow a track through a field densely populated by sheep, much like Cnicht this was my second ascent of Moel Siabod in 4 months as I went up in April with my wife and kids, but this time with an added twist, we where to go up the easy scramble of the Daear Ddu ridge to reach the summit. We made fairly good progress and passed the unnamed (on OS map) Llyn to reach the disused quarry again we briefly explored the area before continuing on to Llyn y Foel, where we stopped for a while, during this time the first spots of rain fell and the clouds came in over the summit ridge to darken the skies.

Despite this we could now see our route ascending the ridge and set off for it at which point the rain started to fall heavier which meant we had to make sure of our footing as the rocks started to lose their grip. The Daear Ddu ridge is an easy scramble with no real difficulties, there where a couple of places where extra care was needed to ensure you had a good hold but nothing serious, back in April I decided not to take the kids up this route instead choosing to take the easy path round the back of the ridge, but having now done this route I would happily take my kids up this ridge. 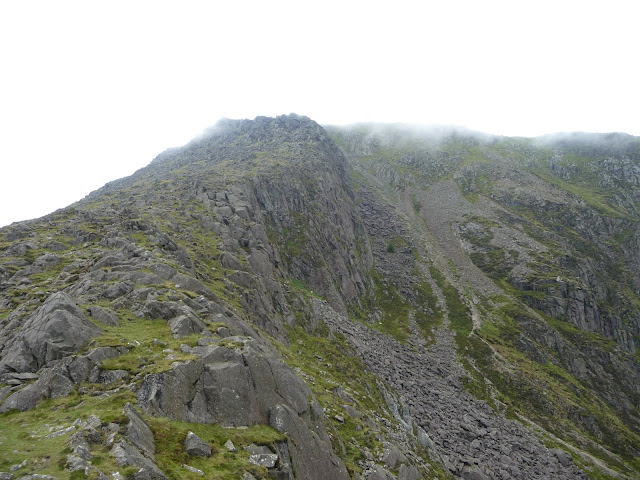 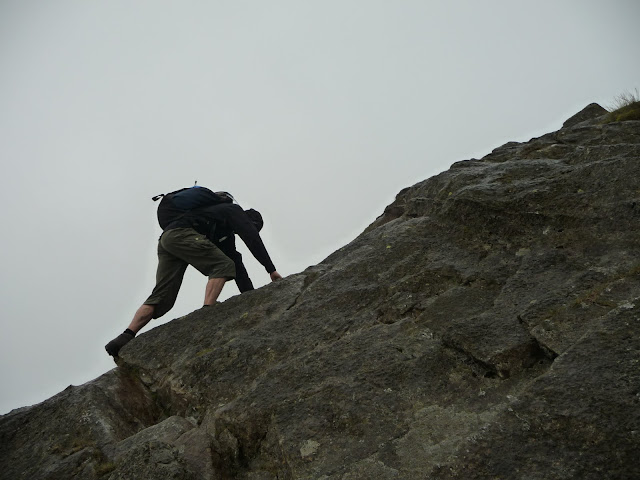 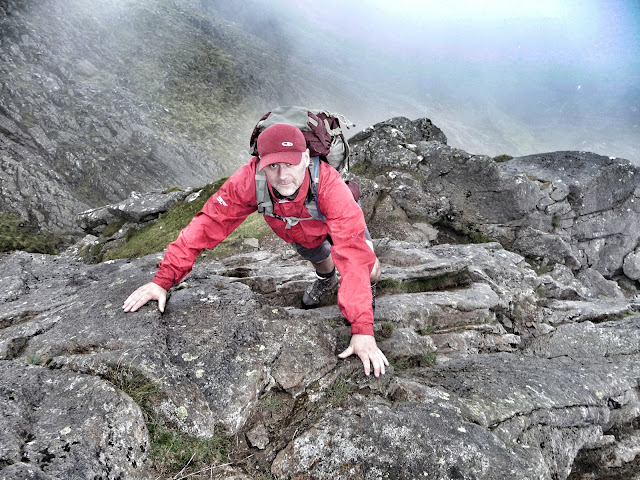 The cloud came in nearer the top and visibility reduced, so when we finally reached the summit trig point the spectacular views you get from Moel Siabod with the galaxy of peaks laid out before you where sadly none existent. 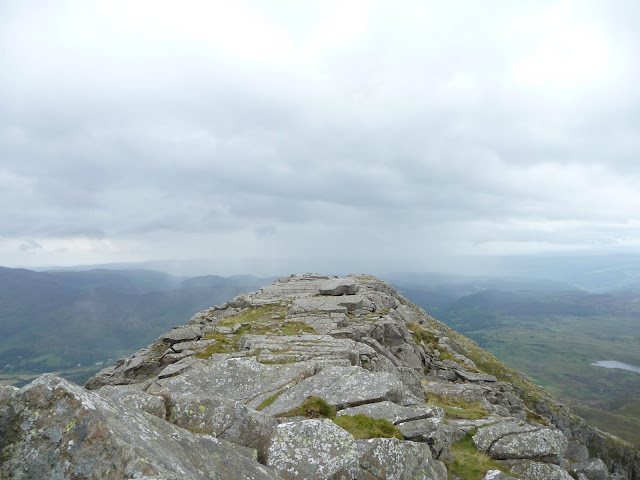 So without lingering we continued on and made our way over Moel Siabod’s wide summit ridge which again posed no problems and was great fun as it ensured we stayed high up for longer, halfway along this section the rain ceased and briefly the clouds parted to give views over to Tryfan. At the end of this ridge is a short steep descent over some loose stones where care was needed not to slip. After which we stopped for some refreshments before continuing on where we eventually joined the field full of sheep to reverse our route in back to Pont Cyfyng.

Abseil (well not quite)

Saturday nights sleep was not as good as it hammered it down all night and in a small backpacking tent  it was quite loud and kept waking me up. So Sunday morning came and we went over to Dolwyddelan to meet up with Mitch’s friends for an abseil, now I have vertigo!! I’m perfectly fine if I’m on solid ground I have been across Crib Goch ok, and Striding Edge with no problems what so ever, but as soon as I go up a ladder or a tree BANG it kicks in, so I got all geared up, went to the edge leant back on the rope fine, then came the words “right, put you’re foot on that small step just over the ledge”, so what did I do turned round and looked down!! BANG!!!!! My vertigo kicked in and I couldn’t go anywhere, so red faced I had to abandon it and left Mitch to show me how it was done as he casually and one handed abseiled down. We then set off for home with me in a bit of a grump as I failed.