Having finally persuaded my wife to give this wildcamping malarkey a try; I waited patiently for a clear window in the weather as I didn't want to put her off by camping out in the rain and high winds, she would never go again!! So with a good few days of high pressure and the forecast being clear we set off for Mid Wales late on Friday afternoon arriving at the car park in Eisteddfa Gurig at 8pm. After paying the £3 parking charge and being assured the car would be safe overnight we set off blindly following the “All walks” sign out of the farm. My plan was to follow the track up to the edge of the forest so when to path started veering off north following a stream alarm bells starting ringing, a quick check of the map and a small off path detour and we picked up our targeted route. So if you ever park here and want to go up the forest route, be aware of this “All walks” sign does not actually mean all walks, although it is a not a big detour to get back on the correct track, where the path turns north just go left up a small slope to pick up the farm track.

We soon reached the forest and turned right on the track skirting round the edge, following this we crossed two fences the second one is not marked on the OS map. From here we could now see the fence which runs the length of Pumlumon’s south west ridge up to the trig point, so we aimed for this, the walk up the ridge gradually gains height. 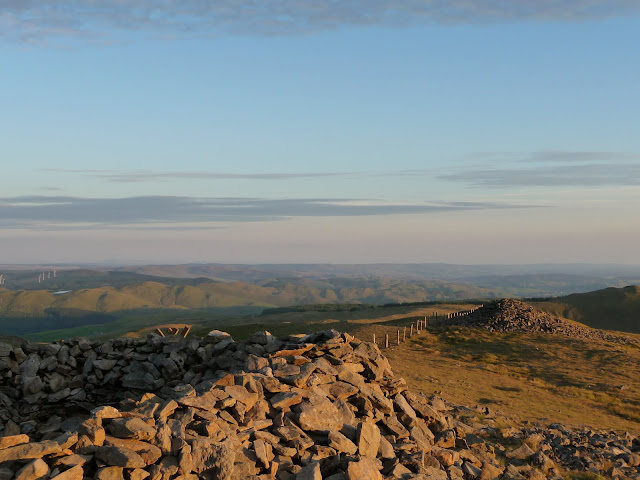 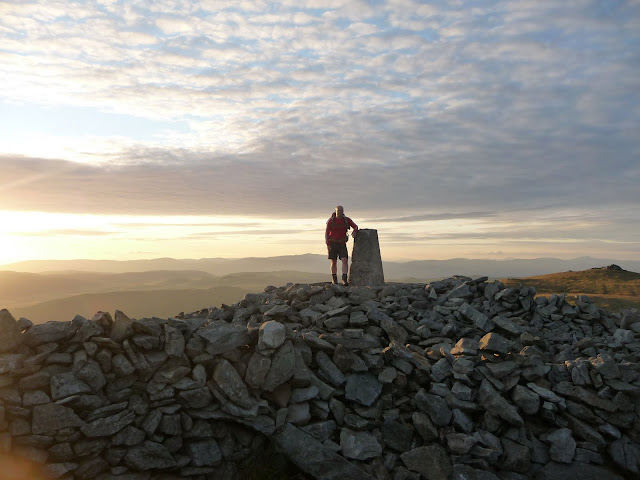 We reached the summit shelter and trig point at 752m not much after 9pm. It was still light and my immediate reaction was WOW!! It almost seemed like we could see the whole of from up here. stretching from the Preseli hills faint in the distant south to the Llyn peninsula and Snowdonia in particular Cadair Idris to the North & West, we could even just make out the high peaks of the Brecon Beacons on the horizon. I took the mandatory summit photos and panorama video. After having a brief rest just taking in the stunning views we headed off to find a suitable pitch for the night. We found a nice spot of flat ground on a ledge just north of the summit, with the tent pitched we sat and watched the sun go down over the Lyn peninsula, spectacular is all I can say. 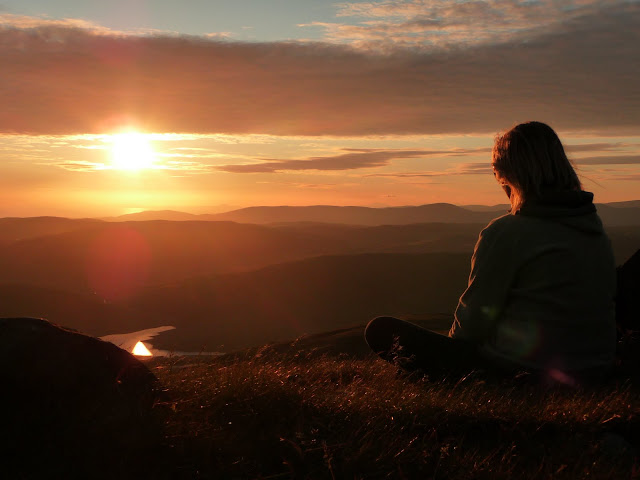 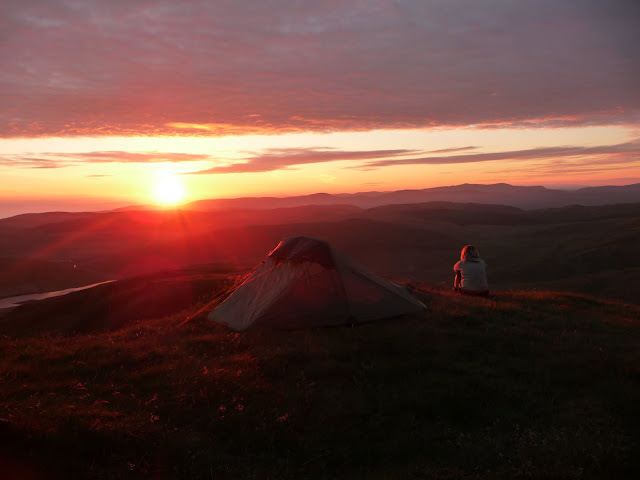 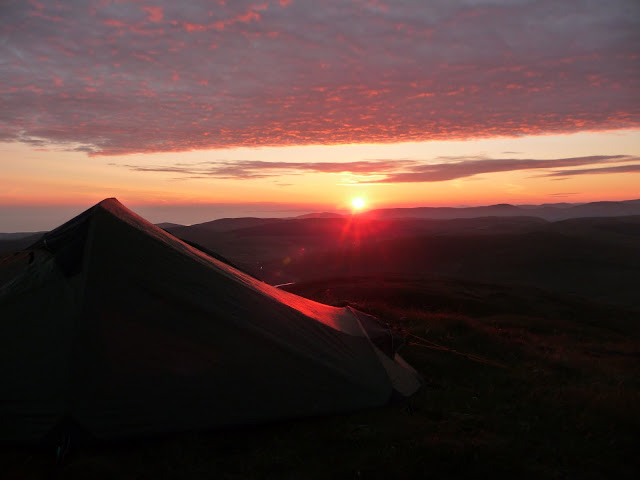 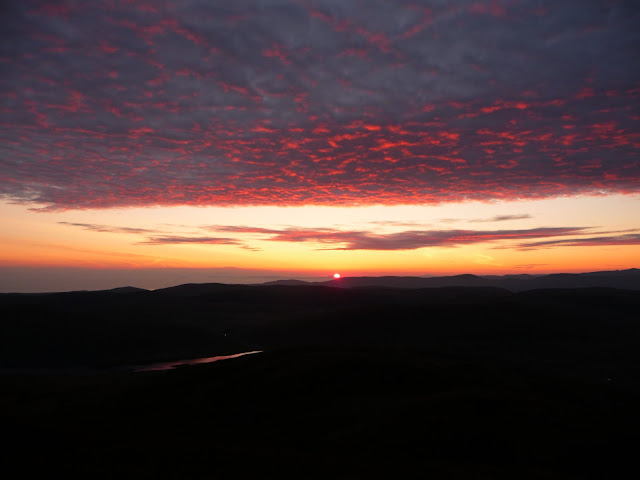 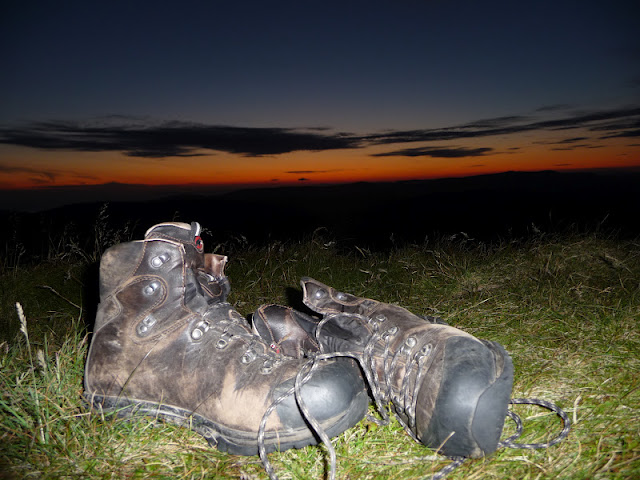 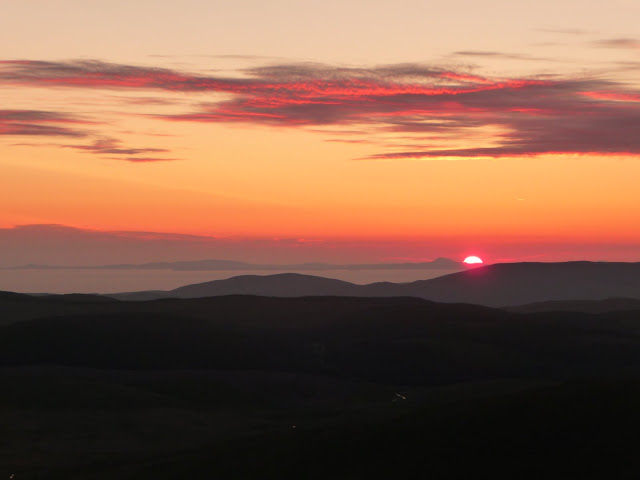 By this time we were hungry so I fired up the Jetboil and we tucked into our “look what we found” Meatballs in tomato sauce and Hot Chocolate after which we settled down for the night, Alison warm and snug in my down bag and on my neo air mat, me in the our cheap sleeping bag and £2.99 Asda foam mat which I bought to cut in half for the dog to use on wildcamps. Mmmmmm lets just say the dog can keep it!! 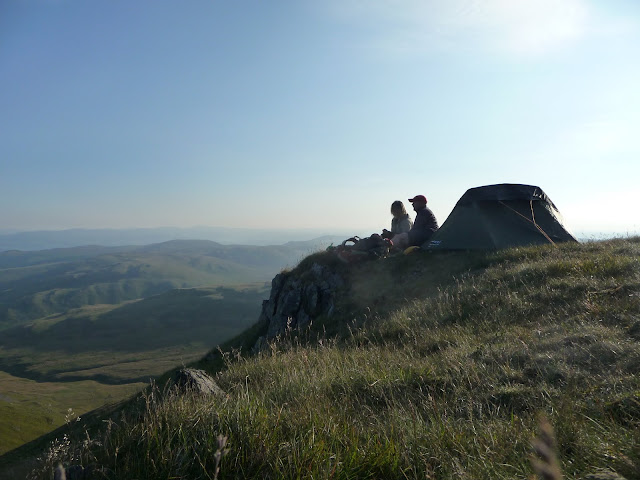 In the morning Alison commented about how quiet it was during the night and how it was weird listening to the total silence, anyway after a quick breakfast I packed up everything left no trace of us being there and we set off east following the fence line passing the twin cairns of the 727m top close to the source of the River Wye, continuing on and keeping the fence on our right we soon reached Pumlumon Arwystli and stopped here briefly to have a snack in one of the shelters. Our conversation turned to the previous night’s euro millions rollover, and what we would do with the money….. If only!!! 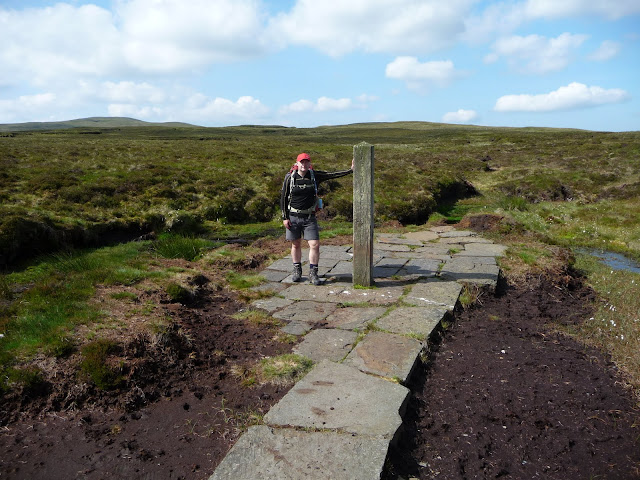 I was very pleased that the weather was dry and warm as I can imagine the next 2.5 km down to the source of the River Severn being extremely boggy and wet any other time. The source of the can be reached by heading east over a style near two small lakes, along a very distinctive path which is the start of the

Severn Way. The actual source itself is about 100m or so long this path. It’s amazing to think this small pool grows into the large expanse of water you see when crossing the . We continued along the clear path which snaked its way down to the Hafren forest. When we reached the edge of the forest we kept to the Severn way instead of using the forest roads until we reached the Rhaeadr Blaenhafren waterfall where we left the to continue it’s long a journey. This is the point where if I’m honest our walk turned into a bit of a trudge. Walking on hard forest roads and then on farm roads in stiff and unforgiving walking boots was not exactly enjoyable so I will spare you the details of this part…… It started getting interesting again when we came to a gate which had warning tape and a sign do not enter. But this is where we need to go!! With aching feet, I looked at the map and said well we need to get up there to pick up a path which takes us back to the car park. So I took a bearing and knowing that we would eventually meet a fence on the hill somewhere we set off crossing a stream and heading up hill, the long uneven grass was energy sapping on the legs but strangely a welcome relief to the previous 3-4km of hard roads. With frequent stops to rest and checking we where still on the correct course the fence eventually came into view and better still we were bang on course for the stile. Phew!!
On the home stretch now and it wasn’t long before we could see our finish point and our car. 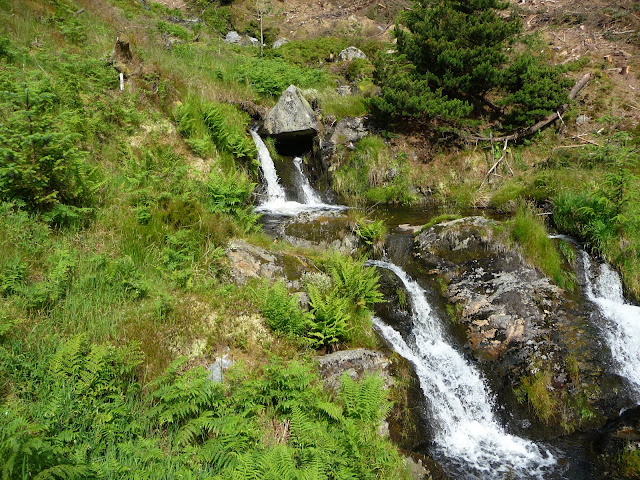 This was the best wildcamp I’ve done, stunning views from the top in a beautiful and very remote area, totally away from the crowds, in fact the only 2 people we saw during the whole time we where out was near the end as they passed us on their way to completing the Wye valley walk. I fully recommend Pumlumon and it is well worth a visit if you get a chance. 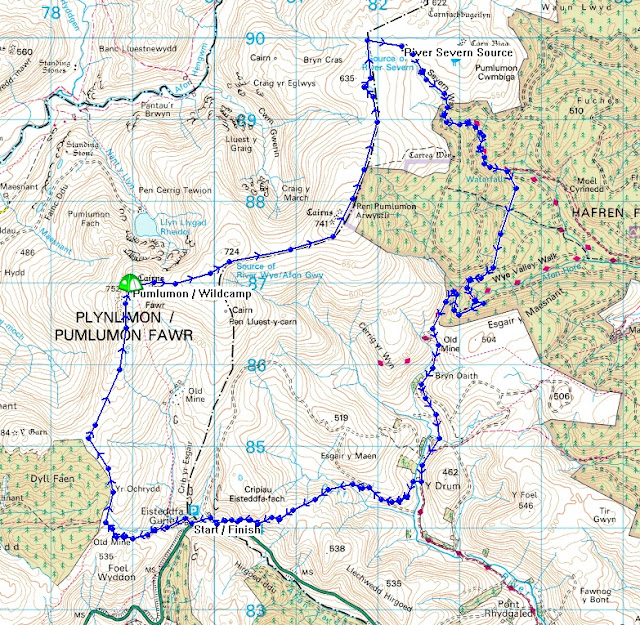