Hay Bluff with a Wildcamp & Waterfalls (front and back)

A weekend away with our neighbours, myself and Mitch would be doing a wildcamp in the Black Mountains and the ladies plan was to do the first part of walk with us from Hay-on-Wye returning to the town to look around the book shops and staying at a B&B. They would then pick us up in the morning and we would go onto Ystradfellte and walk around (and behind) the waterfalls. We arrived and parked the car at the busy main car park in the town. Hay-on-Wye is located on the Welsh / English border, Where most of the town lies within Wales, but eastern parts are in fact in England! The town is, nonetheless, considered to be Welsh. It is famous for its book shops there are over thirty bookshops, many selling specialist and second-hand books.

Day1
We set off along the Offa's Dyke Path, a national trail which stretches 177miles from Sedbury Cliffs near Chepstow on the banks of the Severn estuary with the coastal town of Prestatyn on the shores of the Irish sea. It is named after, and often follows, the spectacular Dyke which King Offa ordered to be constructed in the 8th century, probably to divide Mercia from what is now Wales.
Initially passing through some flat open fields we soon crossed a bridge over a stream and were confronted with snorts from some rather large pigs who found us very interesting, I'm sorry to say the feeling was not mutual as they stank! so we quickly moved on. Now walking through lush green rolling countryside with fields full of cows, luckily paying no attention to us at all, obviously used to people walking the trail. We started to gain height and looking back we could now see Hay-on-Wye. 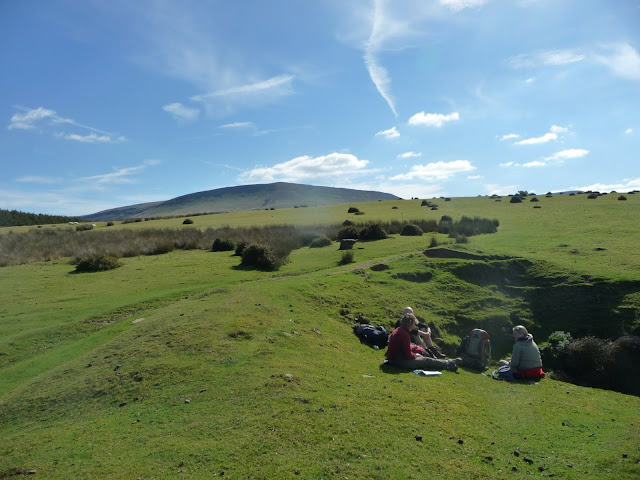 Passing Cadwgan farm a very friendly dog came out to greet us wagging its tail, I think it would have happily continued with us had it's owner not called it back, we then went through a small wooded section and came out onto an open plane and had our first view of Hay Bluff. Finding a good spot for a rest we all sat down and enjoyed the view whilst taking in some refreshments. After a while of just sitting and chatting, the girls decided to head back to the town and Mitch and I continued on. 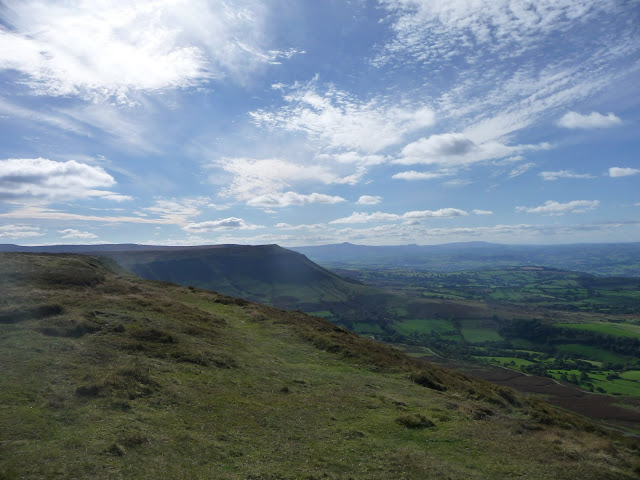 We decided to to take the steep direct path up Hay Bluff, and believe me it was steep, but it wasn't long and we soon where dodging the puddles to get to the trig point. It was a glorious day and the views stretched out before us where fantastic, looking north you could see Hay-on-Wye and the hills of Mid Wales in the distance to the south west in the foreground where Twmpa (Lord Hereford's knob) and the main peaks of the Black Mountains Waun Fach and Pen y Gadair Fawr further in the distance where the Brecon Beacons with the distinctive shapes of the Corn Du and Pen y Fan dominating the horizon. 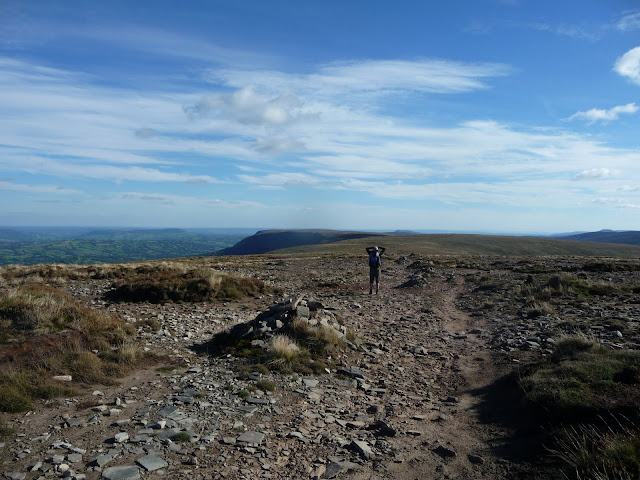 We followed the Offa's Dyke Path along the Hatterall ridge a wide ridge stretching for 10 miles following the English / Welsh border, the Black Mountain (Twyn Llech) at a height of 703m is the highest point of the ridge. The path itself was very distinctive and easy to follow some sections where particularly boggy but these luckily had been upgraded with flagstones. It was quite a lengthy but very pleasant walk along this ridge the expansive views into the Olchon Valley and beyond where superb. 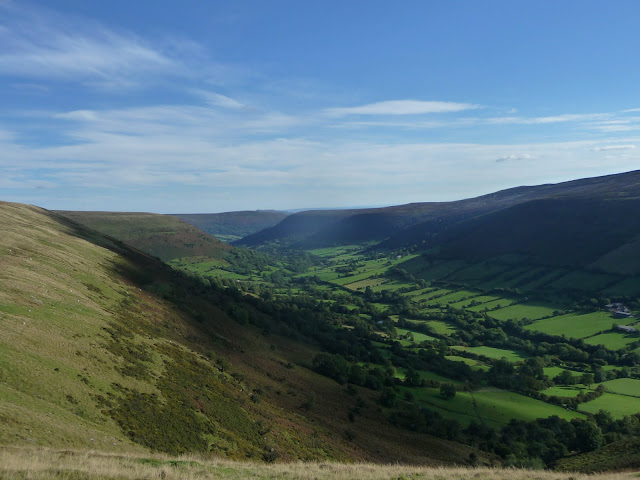 We eventually picked up the path taking us down in the Vale of Ewyas, and while descending in height the whole valley opened up which was a fantastic sight, the contrast in colours from the lush green valley to the more brownish rugged vegetation of the higher ground. The path now zig-zagged it's way down into the valley. After some farm land we walked through the small hamlet of  Capel-y-ffin which means Chapel of the boundary, After nearly being run over on the road which leads to the Gospel Pass, not the drivers or our fault I hasten to add, it's just that the road was so narrow with high hedge rows on either side there was just nowhere for us to go!! Luckily nothing happen and we where safe to continue. Now close to our camping spot, i was looking forward to the rest. 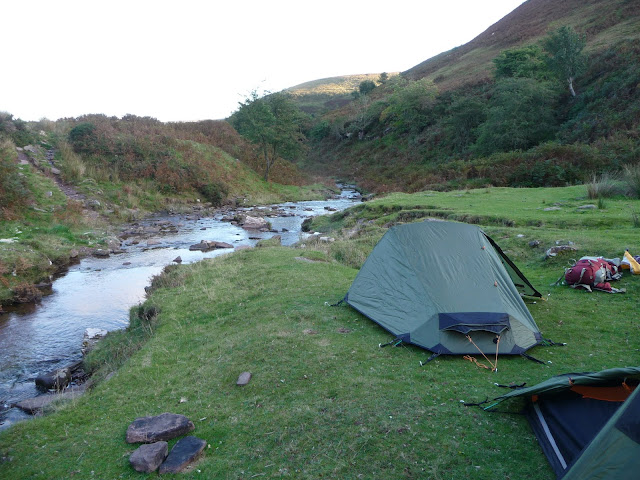 Walking past the farm at Blean-bwch and entering the remote countryside again it wasn't long before we found our pitch for the night. An idyllic spot right by the Nant Bwch next to a waterfall, directly below a brook dropping in from the opposite hillside. The only down side about it is, it's a popular spot for wildcamping and so it proved as another tent was pitched about 100 metres away later on. After pitching the tents (both of us have the Vango Banshee 200, so we looked like tweedle dum & tweedle dee) I sat down and rested.... Thank goodness as I was pretty tired by now so out came the Jetboil and a few minutes later I was enjoying a "look what we found" Gloucester Old Spot Meatballs with Butter Beans and a nice cuppa..... Bootiful!!! As we were in a valley as soon as the sun went behind the hills the temperature noticeably dropped. After sitting and chatting for while we retreated to our tents and I settled down and listened to some music before dozzing off. Now I don't normally have to get up in the middle of the night for a jimmy riddle but it must have been the sound of running water close by cause I was desperate, I was also aware that it was very cold outside and I didn't want to get out of the sleeping bag. Having tried to ignore it for a while I eventually had to give in and I got up. Half asleep I stumbled out the tent and looked up, WOW!! Not a cloud in the sky, the sheer number of stars was amazing. Anyway having admired the heavens for long enough I retreated back to the relative wamrth of the sleeping bag and the land of nod, zzzzzz.

Day 2
Waking early I stumbled out the tent to find Mitch already up and making a brew, perfect timing. It was a cold and fresh morning, the sun just barely rising down the valley. We had breakfast, packed up our kit and set off following the Nant Bwch towards it's source. It was a good walk for first thing in the morning as the gradient was nice and gentle. 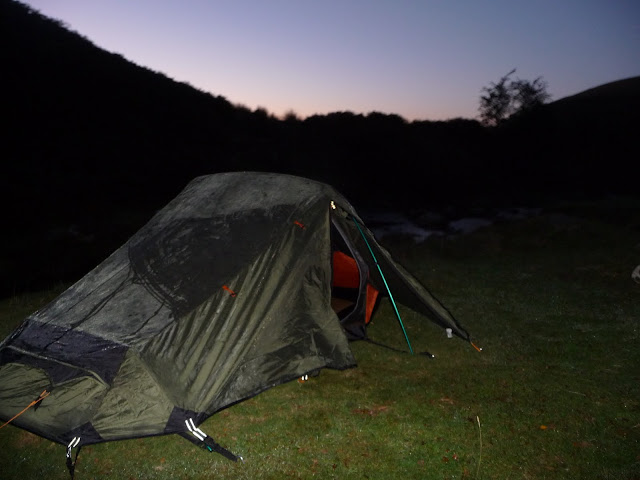 When we reached the head of the valley the views back were stunning with the low orange glow of the sunrise contrasted against the rolling landscape of the hills, looking the opposite direction out over towards the Brecon Beacons the sky was still quite dark above with the moon prominent in the sky.


We did the quick ascent up to bag Twmpa which is where the panorama video is taken from, staying here for a while to fully take in the sunrise and views out across the open countryside before finally making our way back down from Twmpa towards the clear path which descended down the escarpment, before descending this path we noticed a "diving board" and took in turns to pose on this.

We soon picked up a road and followed it to our pick up point near Tregoyd House. Our wives soon picked us up and we where setting off to Ystradfellte and the waterfalls, they had a good night at the B&B and enjoyed their walk back to Hay-on-Wye and the book shops, my wife had got me a book The big walks of Great Britain by David Bathurst.

The waterfall walk was really nice finish to the weekend, we went in Porth yr Ogof cave, and from here walked to Sgwd Y Eira waterfall which you can walk behind, the pictures below show us before going behind and then my wife and I behind the waterfall having great fun and getting well and truly soaked!!! a great experience though. 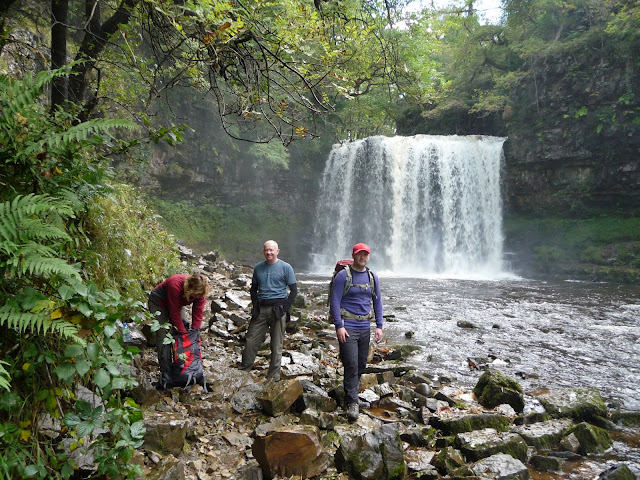 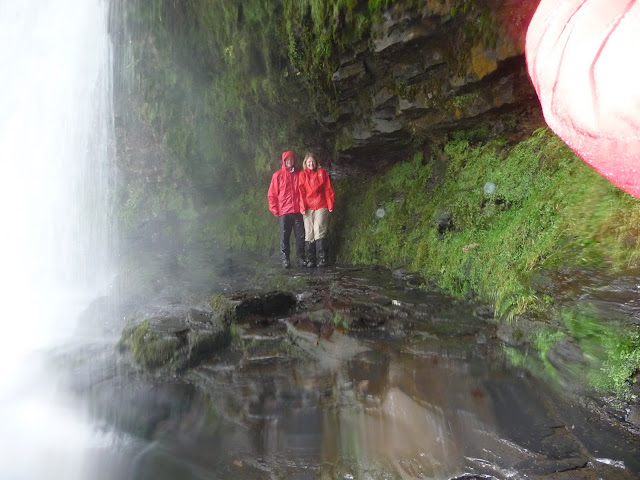