Fathers Day and my treat was a day in the Brecon Beacons. The idea for this walk came from Trail magazine who published this route a few months ago. I thought it would hold the kids attention, knowing that we where out to find the site of the Canadian Wellington bomber which sadly crashed into the hillside in thick fog in 1942. I also looked up some geocaches which we would be passing along the route. So as to incorporate some treasure hunting into the walk. This worked a treat and kept the kids interest all the way round.

A long drive from Oxfordshire over to the upper Blaen-y-glyn forestry commission car park beyond Talybont reservoir was not aided by some roadwork’s on the M50. Very frustrating!!!!
Anyway we eventually arrived, parked and set off walking back out the car park and turning immediately right up a path with a pretty waterfall to the left. This first section follows the Beacons Way 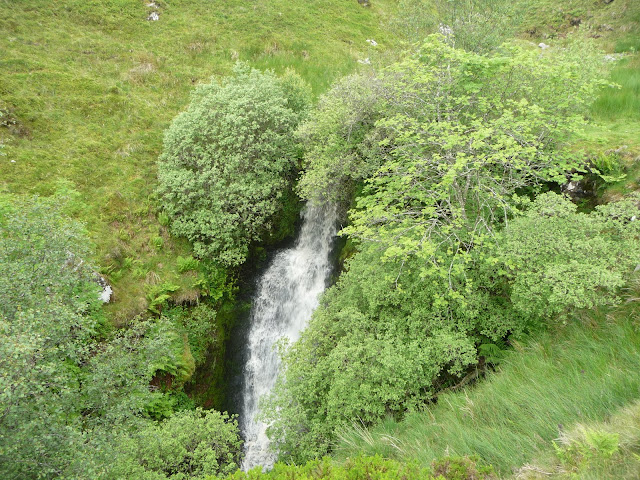 and is a good slog up to Craig y Fan Ddu but once completed gets the main bulk of the day’s ascent done and dusted early. My youngest daughter made her way up at her own pace accompanied by my wife while my eldest daughter and I sat and waited at the top, our dog Megan then went back and forth between each of us and must have done this 2 or 3 times, I suppose in her own way ensuring all of us where ok, as we were briefly split up. We re-grouped and continued on, now on the crest of Craig y Fan Ddu the view across the valley to Waun Rydd opened up and we could see the rest of the days walk, when I pointed this out my youngest daughter “look, along here, up there, across that, along that, down there and back through that” she just looked at me as if to say “What! That’s too far”, so it was a good time for refreshments. Perching ourselves on a boulder we eat our sandwiches and cakes taking in the views. Once replenished she pressed forward with renewed energy knowing we where approaching the first of the geocachces, we knew it was around the Blaen Caerfanell waterfall, and whilst I was busy taking pictures and video’s my daughters found it. Excited they opened it up recorded our visit and exchanged treasures, when I say treasures more like hair clips, pencil sharpeners, rubbers, toy cars etc etc. but still treasure. 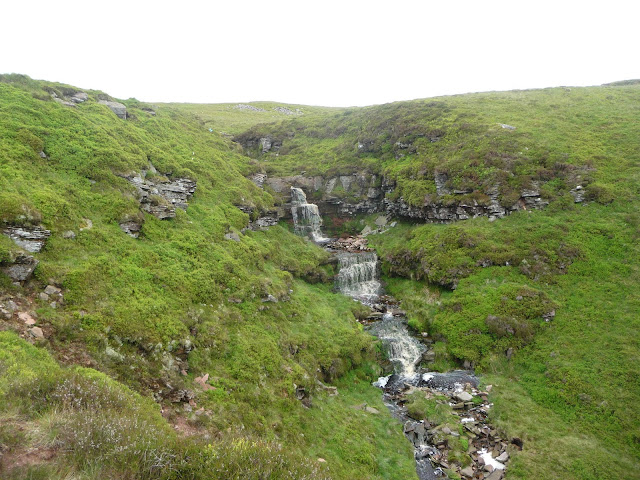 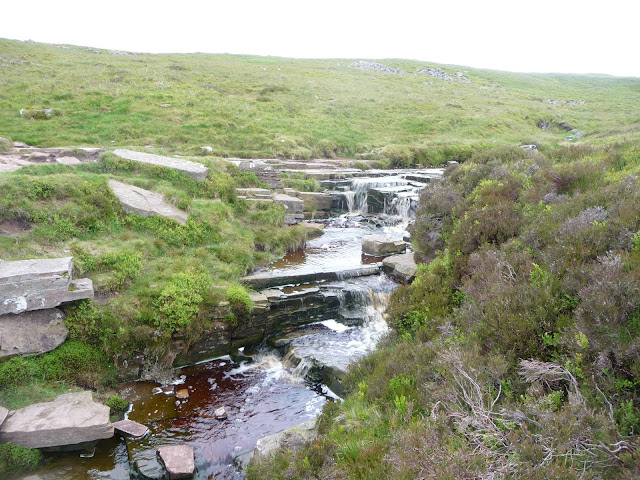 Feeling satisfied with our find we continued on to Graig Fan Las which had a couple of “diving board” photo opportunities with some great views back to Craig y Fan Ddu. 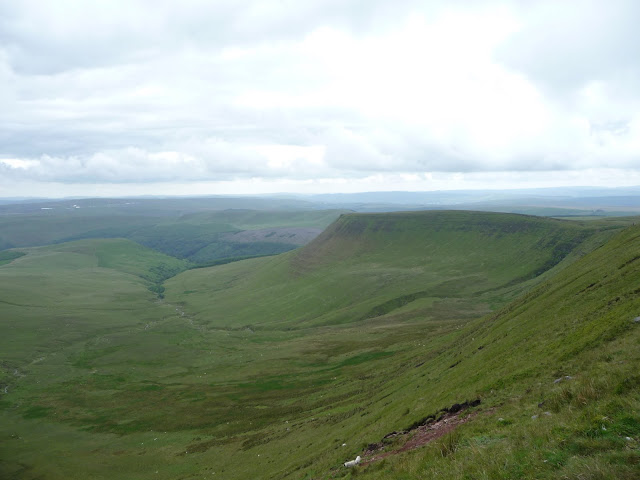 Megan decided it was a good time to roll around in sheep poo; it was all over her back and neck. YUK!!! You will realise later why I mention this. Also along this stretch my youngest daughter who was wearing some walking boots which where one size too big, decided she had had enough of these and wanted to change to her spare footwear which was the correct size. So off went the waterproof robust outdoor walking boots and on went the flowery M&S pumps, bless her. Although not waterproof they stood up to the rigors of the outdoors pretty well, so it just goes to show you don’t need expensive gear when you’ve got M&S pumps, maybe we have stumbled across something new here, will have to see if M&S will do a gore tex lined version, Ha, Ha.
We made a quick detour across to the flanks of Bwlch y ddwyallt to get the views over to the main Brecon Beacon peaks of Pen y Fan, Corn Du & Cribyn in the distance. 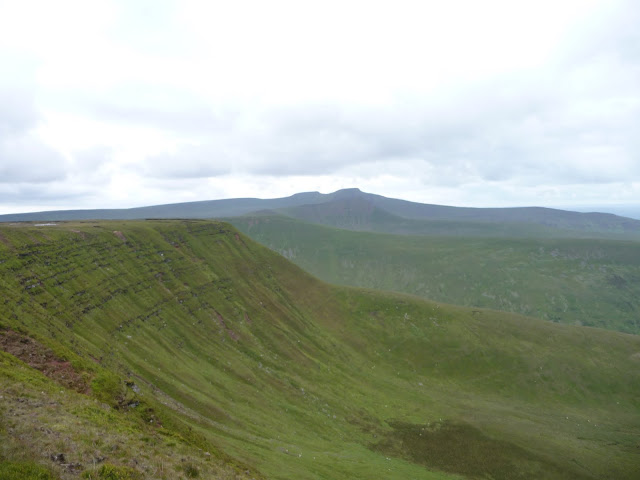 Once back on track we then headed off across some very boggy ground and now that my youngest had changed to her M&S flowery pumps I had to carry her over some of this ground, which resulted in much fun & laughter.
We soon reached the memorial and crash site for the Wellington bomber, the site is just below the northern end of Cwar y Gigflan there are 2 main piles of twisted metal, the plane crashed at this spot on July 6th 1942, having become lost in thick clouds during a training exercise. Sadly the crash killed all five Canadian crew, and their names are recounted on a plaque on the memorial.  The twisted wreckage is very sobering to look upon. There where many small crosses and wreaths around, so it looks like the poor airmen who died here are not forgotten, which is good. 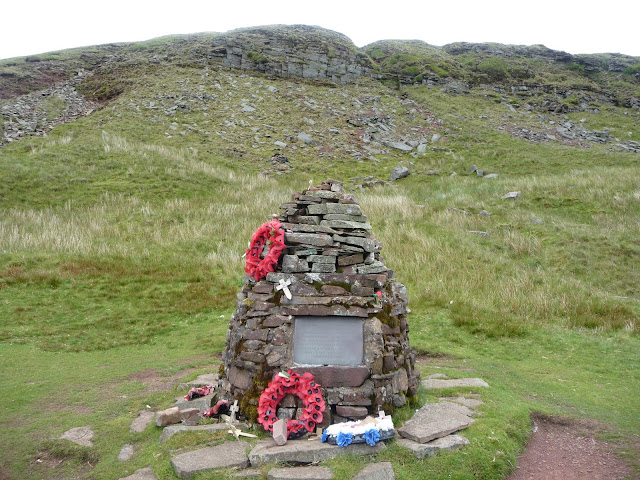 Back to geocahcing we followed the base of Cwar y Gigflan to a man made stone arch and found the cache nearby relatively quickly. The kids again recorded our visit and exchanged “treasures” before taking the opportunity to rest here and take on more refreshments including a nice warming hot chocolate with the aid of my Jetboil.

After a good rest we retraced our steps back to the memorial and then took the short but steep path up to the top of Cwar y Gigflan once on the top the wind really hit us walking along the ridge line, and was strong enough to gently lean into. 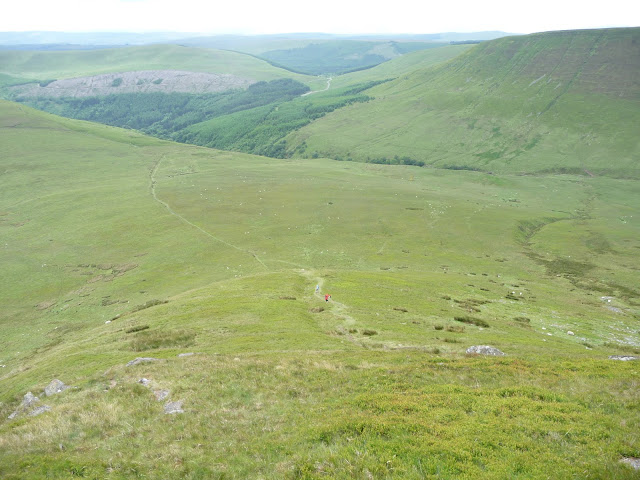 We reached the cairn on the southern tip and proceeded to hunt for our third geocache of the day, we must be getting used to it as we again found the cache pretty quickly, and after the standard “treasure” swapping we made our way down the steep grassy hillside to cross the open fields then down to the river by the edge of the forest, crossing a style with no way of getting a dog through other than to pick her up. Remember my earlier comment about her rolling in sheep poo, well yeah you’ve guessed it I got it all over my hands!! Thanks Megan!! 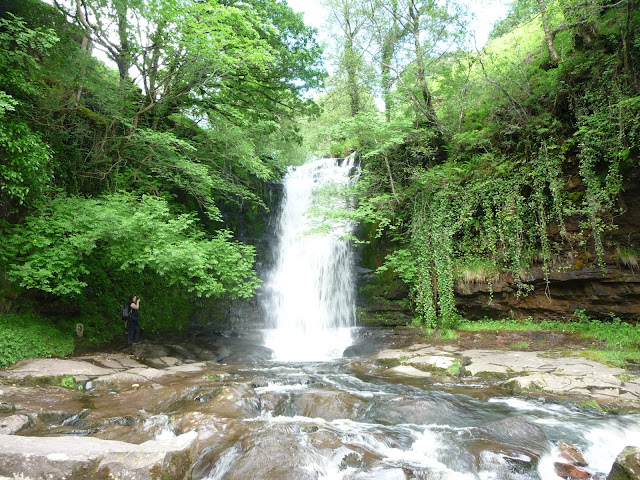 Following the path down keeping the river to our right we eventually went across a footbridge by a large waterfall, which we could get right up close to, there was supposed to be another geocache close by but the area was crowded with people so we left that one and continued over another style getting sheep poo on my hands again…..MEGAN!!!! Turning right just before a small bridge we followed a steep forest track up through the trees passing more waterfalls back to the car park, finishing off a great Fathers day walk.