Having booked a day of work, the evening before I was sitting at home in Oxfordshire planning where to go, looking at the Met Office mountain area forecast website I suddenly had the idea of going to the Lake District for the day to take advantage of the predicted clear weather, When I mentioned this to my wife “you must be mad” was the response.

I must admit I thought the same when the alarm went off at 5:00am nevertheless I got up put the kit and the dog in the car and started the long journey up to the lakes. 4 ½ hours later I was in the Old Dungeon Ghyll NT car park getting the kit and dog back out the car. The Crinkles and Bowfell is a walk I have wanted to do for a while and I couldn’t have picked a better day for it, as I set off there was not a cloud in sky and the air was fresh and clear. The ground was frosty as I passed into the shadow of Pike of Blisco on my way to the ascent up from Oxendale. I soon gained height and it wasn’t long before I was confronted with the sight of the Coniston fells to the South and the first of the crinkles to the beyond Great Knot. In reaching the first crinkle there were some fantastic views across to Scafell Pike and beyond to the Isle of Man, also back down into the Langdale valley, after a quick sandwich stop I continued forward towards the Bad Step, unfortunately as I had the dog I had to go round so I missed out on scaling this famous feature (gives me an excuse to go back). Whilst walking round I met a Scottish gentleman who was 71 and still going strong having completed well over 200 Munros and virtually all the Wainwrights, I just hope that at that age I can still do the same. The remainder of the crinkles where soon polished off and I started the ascent up Bowfell. After reaching the summit I took time out to take in the scenery which was incredible, the whole of the clear in all directions with the near horizon being dominated by the Scafell massif, not a bad place to have lunch. Continuing forward I was soon descending to Angle tarn from Ore gap then all that remained now where the zigzags down Rossett Gill and the easy stretch along the Cumbrian Way back to the car park, which finished off a great days walking with the dog who was impeccably behaved throughout. She was however tired and slept the whole journey back home. I arrived home at 9pm and even though it was a long day and drive, it was very much worthwhile. My wife still thinks I’m “mad” …… she’s probably right!! 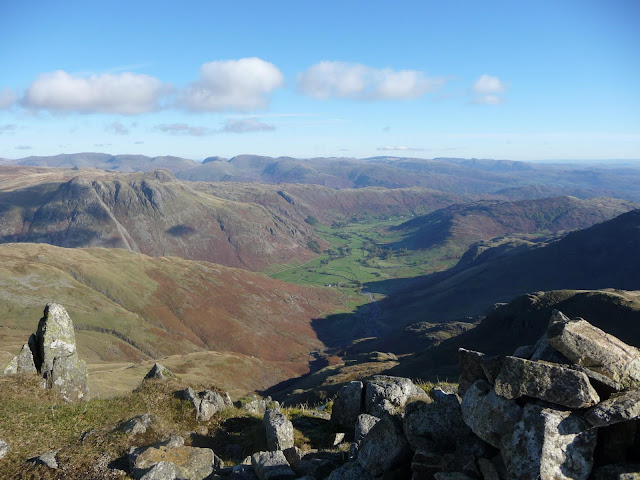 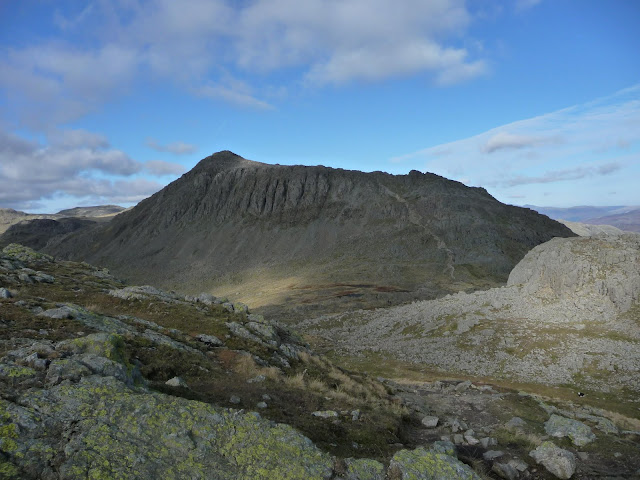 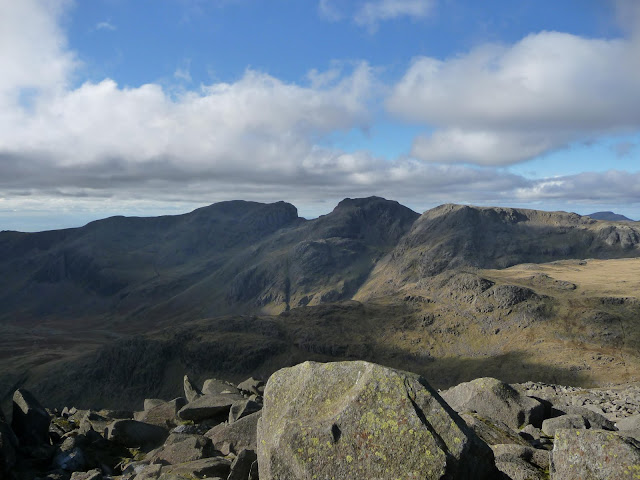